When you live in a famous city, you get used to reading about your hometown. But very few Vegas-based books have a truly local setting. In “The House Always Wins,” author Brian Rouff takes us to a part of town that doesn’t make it to the Travel Channel, with characters that will ring a bell or two for any long-time resident.

If you know anything about Las Vegas, you’ve heard of our most famous street: Las Vegas Boulevard, a.k.a. The Strip, a.k.a. The Boulevard. It’s sparkly and fancy and attracts the attention of over 40 million visitors a year.

Unless you’re truly a local resident, however, you probably have not heard of East St. Louis Boulevard.

Brian Rouff’s newest novel, “The House Always Wins,” opens with a whirlwind romance that begins in Michigan and winds up in Las Vegas. Our heroine, Anna, quickly succumbs to the charms of Aaron, a touring Vegas musician, and in short order, Anna and Aaron are married with a baby on the way. Finding a house quickly becomes a priority.
Rouff describes the bulk of houses in Las Vegas with complete accuracy: “Outside, some variation of an earth tone, a red-tile roof, and a mottled textured coating they call ‘stucco.’ All accented with a patch of ‘desert landscaping,’ meaning rocks, cactus and other bushes that require less than a thimble of water to survive.”

Then Anna wanders into what’s now known as the Beverly Green Historic District, and is captivated by a two-story brick house that stands out from the cookie cutters she's seen. I thought it sounded a lot like the house the Sahara's orchestra leader Jack Eglash once lived in (which was actually further east in the Mayfair District), and in fact Rouff and his family bought and remodeled Eglash’s former home in the 2000s. Today, that distinctive home is gone.

Beverly Green, Mayfair and all of the aging/vintage neighborhood in this area hold a mix of homes that range from fully restored to vacant lots that once held homes, with everything in between.

Anna and Aaron take on the fixer-upper and Anna finds that it comes with a ghost named Meyer Levin, who has a lot in common with Moe Dalitz.

Dalitz isn’t the only local who makes an appearance, so to speak. One of my favorite nods to local lore is the character of Ed Scott, a muck-racking reporter who’s ready to help Anna fight a casino owner (imagine Bob Stupak crossed with Steve Wynn) to save her property from becoming a parking lot. Just like local reporter Ned Day, a man who covered the mob, Scott expires while swimming on vacation in Hawaii. (In real life, Day died of a heart attack while swimming--some would add "allegedly"--while the character of Scott drowns.)

Neither the ghost of Meyer Levin nor Anna are willing to let the house get turned into a parking lot, but if you want to find out exactly what happens, you’ll have to pick up the book.
The locations described throughout the book are very familiar to me, since I grew up in the area, just a few streets from East St. Louis Avenue. It’s a real pleasure to read a story set in my old ‘hood, and anyone who knows Las Vegas will enjoy the attention to detail throughout the story.
Rouff is also the author of two other Vegas-based novels, “Dice Angel” and “Money Shot” (both of which are also quite good). I’ve seen a few comparisons drawn between Rouff and Carl Hiaasen, although personally I was reminded of Janet Evanovich’s style. In addition to being a great writer, I have to tell you he’s also one heck of a nice guy, being kind enough to come speak to my former writing group back in the day.

If you’re looking for a Vegas book that goes beyond the Strip, pick up “The House Always Wins” and see a side of the city you don’t know about.

*
I took the photos for this post along East St. Louis Avenue traveling from St. Louis and Atlantic west to just east of Las Vegas Boulevard, where the actual street address of the house in the book, 339 E. St. Louis, would be, according to Google... if there were any homes there: 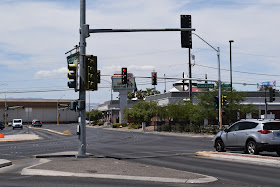 Look for a future series of photos from me taken mostly in this area and the Mayfair District, where I grew up.