Hiking in Las Vegas: The Countdown to Summer

If you love hiking at Red Rock like I do, you probably know that the time to enjoy mild temperatures is rapidly coming to a close. The searing temperatures of summer will be here soon.

I’m determined to take advantage of every bit of spring before Nature turns the broiler on, so this past weekend I got out for hikes on both Saturday and Sunday.

On Saturday, I took the team (my son and our dog) to a trail near 13 Mile Campground (also known as Red Rock Campground). We’d decided to climb a small hill there (about 200 feet, according to the topo map, although I thought it looked higher than that). Saturday was cool and windy, which we were glad for not long after we set out.

The trail starts at an abused patch of desert filled with uprooted yuccas and dog droppings, but beyond that the trail leads uphill and into the desert. The land gradually gains altitude with three hills that gently increase in height. At the crest of the first hill, there’s a great view of Red Rock’s cliffs and Calico Basin.


Atop the second hill, a four-foot rock cairn greets you. 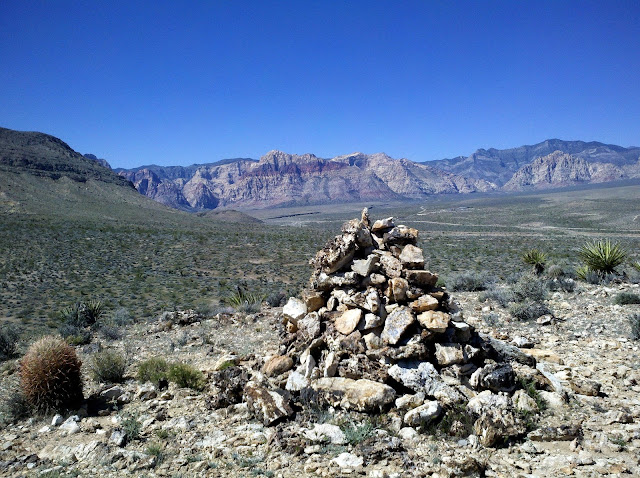 And at the very top—which is composed of volcanic rock (in sharp contrast to the sandstone found throughout Red Rock)—the Strip rises far to the east, the massive buildings tiny in the distance. 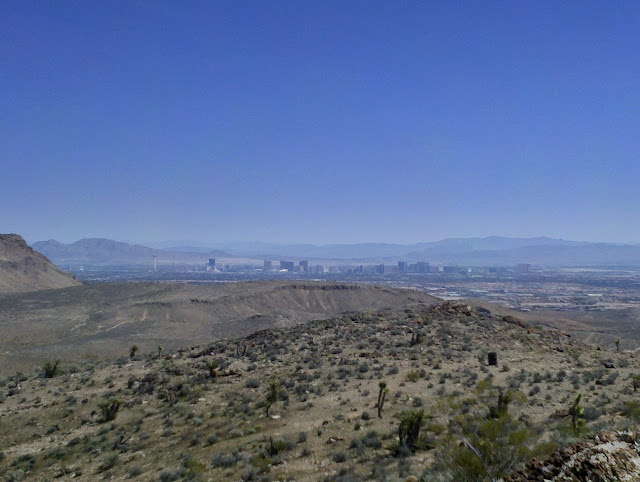 When we got back to the car (two hours later), Gigi, our dog, was worn out. She climbed in the backseat and laid down without waiting for water. The look on her face was plain: “That was great, but I’m bushed. Bring the water to me.” (She’s kind of a princess.) She gulped down three bowlfuls, then belched and went to sleep. Ah, to be a dog.

On Sunday, my son and I decided to leave Gigi at home because we wanted to do some rock scrambling. Gigi believes (incorrectly) that she’s a mountain goat (or perhaps a Big Horn sheep), so she had to stay at home because I don’t like broken legs.

My son and I went back to Ash Canyon, where we’d had to turn around the week before (due to Gigi the Goat Dog and my whole anti-broken-leg stance).  This time, my son and I bouldered up the wash until we had to go up and around. 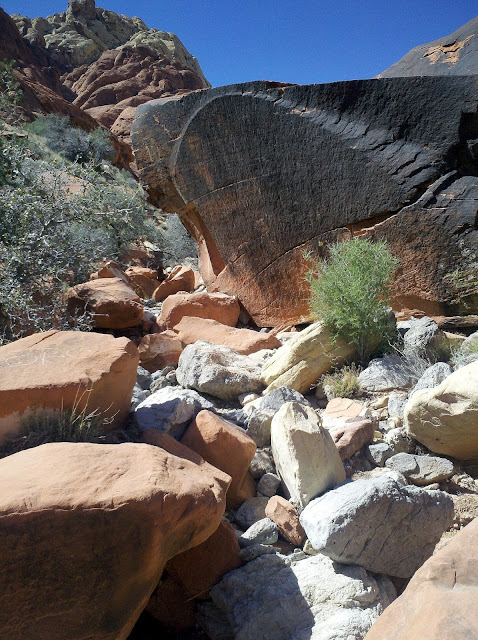 Once upon a time, in my previous life as an uber-prepared hiker, I would have had a trail guide with exact directions. Not anymore. I’d done a cursory Google search, so I knew we had to climb out of the wash eventually, but I couldn’t remember if it was the trail on the left or the right side of the canyon.  We chose the left. 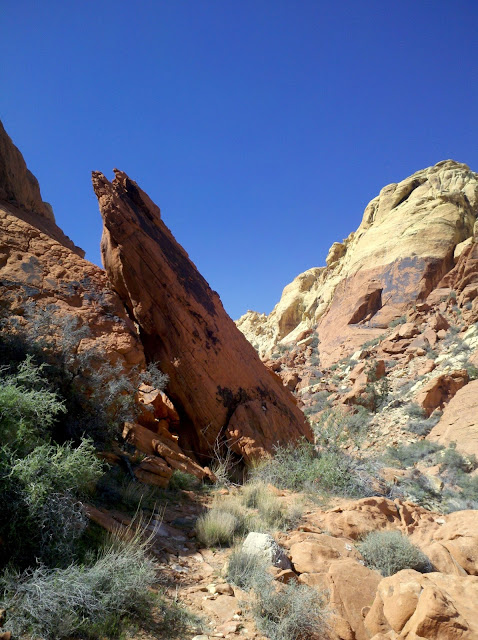 By the time we encountered an imposing shelf of sandstone that made me say, “Sorry, but I’m not climbing up that,” we were both ready to turn around and come back.

“I think we should only hike one day of the weekend,” my son commented. “I’m kind of worn out.”

“Probably,” I said, thinking about the chores I had waiting at home.

But the day was clear, the skies a brilliant blue against the red rocks, birds were singing, and the trees were budding. I decided it would have been a shame to have wasted such a day on chores.

“We live in a beautiful place,” my son said several times on the way back.

Have you been out to enjoy the desert while the weather’s still nice?
Posted by TH Meeks at 9:29 PM

Great Pics. Have done these hikes myself and they are always enjoyable. Thanks for sharing.

Thanks, Marielaina! I think it's now time to shift my hikes to Mt. Charleston... too darn hot at Red Rock, unless you're an early bird (which I am not).

Visit my other blog, Just Write, for information about events of interest to Las Vegas writers--along with my take on the writer's life and an extensive collection of freewriting prompts.

Some links are sponsored

If you would like to advertise on my blog, please drop me an e-mail.

Links to My Work